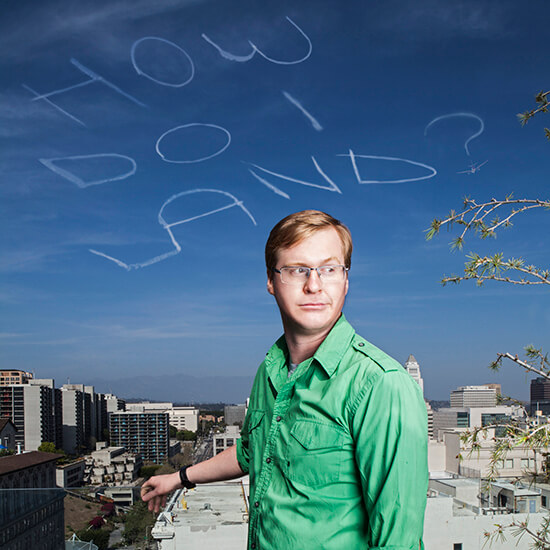 Kurt Braunohler on the Delight of Absurdity You may have become aware of Kurt Braunohler when you logged into Reddit and saw a photo of a sky written message that simply read, “How Do I Land?” but behind the clean-cut host of Bunk and LA’s Hot Tub lies a delightful comedic mind.

The “How Do I Land?” stunt was part of a Kickstarter campaign that went so well, Braunohler decided to make it the name of his debut album, which includes a story about him being breastfed until age 5, insulting Sasha Baron Cohen, and recordings of his own dreams which you have to hear to believe.

I had the opportunity to talk to Kurt recently about how he became the man who would eventually prank LA’s skies with his absurdity.

Karen: There’s an interesting dichotomy you project in that you have a very clean-cut, polished, small-town look, yet, your act is pretty dirty. It catches a lot of people by surprise. Is that your secret weapon?

Kurt: It is the weirdest thing that I look this way, but I do not at all act this way. I’ve struggled with it my whole life, until I finally just accepted that this is the way I look. For a long time, I would go out of my way to have a personal appearance on the verge of of an insane person, because it was closer to how I felt, but I looked so dumb. So, I just stopped. It was like, “I’m just going to look like a banker.”

Karen: How did you get to be you? You claimed that you were breastfed until age 5. What was the Braunohler home like?

Kurt: My parents got divorced when I was 2, so I have this weird thing where I have 8 brothers and sisters, but I am also an only child. (I’m the only child from my mom, but my dad has had 8 kids from 4 different women.) I grew up with my mom in New Jersey, but I would visit my dad a lot, so it was like I had 2 worlds. My mom was a nurse. We lived in New Jersey. Because she worked, after school, I would have to go to another family’s house and hang out with them. We didn’t have much money growing up, so when I went to visit my dad, and he did have money, so it was like going to this other world where we didn’t have to clip coupons all the time, and apparently I was a fucking brat when I got there. My childhood mind was thinking, “they have so much money. I’m just going to demand they buy me things.”

I had to get on a plane by myself at age 5, multiple times a year, and fly myself. You get really lonely doing stuff like that. You had to figure out ways of entertaining yourself. My dad was so cheap too. He would never buy a direct flight. I always had a 3 hour layover in Dayton, Ohio. That’s where I started smoking. I was in Dayton by myself and I would just buy a pack of cigarettes. You could smoke in airports at that time, so I would smoke in the airport at age 10.

Karen: Do you believe in that idea that only children have an increased capacity for observing people’s weird behavior?

Kurt: I think it makes it so when you look at families, you think “that’s weird. Why is that happening?’ It doesn’t happen that way for you.

Karen: What was the moment for you when you decided comedy was for you?

Kurt: I came to stand-up from a roundabout route. I never intended to be a stand-up. I wasn’t huge into stand-up as a kid. When I moved to New York at 22, I didn’t know what I wanted to do. I took an improv class, and the first scene I did, I felt like “I want to do this for the rest of my life.” It was the first time I ever felt like that about anything. I tried to make a living off improv. If I had thought about it for one second, I would have realized that just doesn’t happen. I tried to do it for 8 years. Finally, we created this format called The Neutrino Video Project, which was kind of like an improvised movie shot and edited while the audience watched it. Nothing like it had existed on stage in the improv world. We taught all these people, we travelled the world. We went to Edinburgh and we lost $10 000. I remember being in Edinburgh, thinking “this is fucking horrible. I’m going to start writing when I get back.”

For the next 2 years, I just wrote for her and I. Then, she blew up, and I realized I had to write for myself. I went from working with 8 people to working by myself.

Karen: You tell a really cringeworthy story in your album “How Do I Land?” about an audition for Sacha Baron Cohen. What is it about mortification that you find funny?

Kurt: Mortification? It’s weird, because I never really thought about it that way. I’ve always thought of myself as someone impossible to embarrass. It’s not that I’m embarrassed by things I did, I just think they’re super dumb, and I love relating dumb stories.

Kurt: I used to have this bit about walking into a bookstore and signing books as the author. Then, I thought about putting a lot of time and effort behind stupidity, and I loved the idea of “sneak attacks of stupidity.” Taking the mundane and making it a little more unexpected. I started doing the Greeting Card Project. Then, I sat down and wrote a whole bunch of ideas about how I could insert this stupidity in other places. I thought “I could skywrite!” I almost didn’t do it because Kickstarter requires a video. It really just took off. I just wanted to do it as a joke. That’s just pure joy in my opinion. I just wanted to see it real, for me. Then, after that I decided to title the album. It was never a marketing thing. I wanted to have a party and have a skywriter write the dumbest thing I could imagine. Months later, I had that photo that blew up on Reddit just in my computer. I thought, “I should probably post this photo,” because the people on Kickstarter were getting mad. I assumed that the people on Kickstarter all followed me on Twitter. Some random dude took that photo and put it on Reddit. Thank God he credited me. I would like to thank the guy who put it up on Reddit. It made the front page. So much happened after that.

Karen: Did it surprise you that something that was a funny idea to you went viral?

Kurt: At this point, I had been making comedy for 15 years, and this was the thing that took off.

Karen: You are also responsible for the “No, YOU Stop” sign. Can we expect more things like that soon?

Kurt: I have this web series for Comedy Central and it’s going to be an interview show with something that brings absurdity into people’s lives. That’s what I am happy and excited about. I did something that I just wanted to do and now I have opportunities to do that on a larger scale.

Karen: Settle an internet controversy for us: Did Kristen Schaal actually melt down in her special?

Kurt: Look, if anyone out there believes that an 11-year-old girl was in the audience and just happened to have a super tight 3-minute set… I mean, come on. Get your shit together.

Karen: That special stick out for another reason: it has a level of absurdity not found in many other Comedy Central specials. Was it fun pushing the Executives’ comfort levels?

Kurt: That was all Kristen. They offered her a special earlier and she wanted to do it in a specific way and they said “no.” Then they came back and said “Ok.” It was super fun to write the bits for the little girl.

You can catch Kurt’s Podcasts here, see episodes of his show Bunk on Netflix, get tickets to Hot Tub here.
Source: New feed