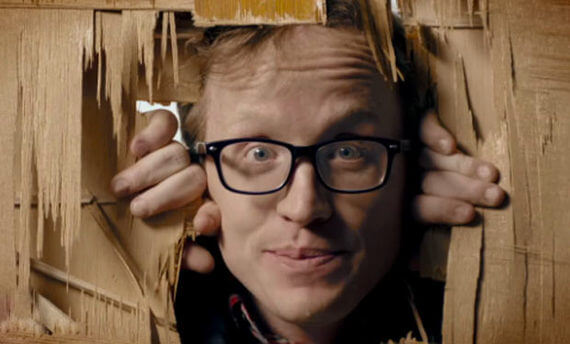 Of Human Fish and Eating Butts: The Controlled Chaos of Chris Gethard “Eat More Butts” chants the audience with a vigor that belies the content of their chant. This is another episode of The Chris Gethard Show: A public access trip through improv insanity set to a live call-in show beat.

Gethard, a longtime UCB alum has been harnessing this type of madness for over 130 episodes, and has become a sensation in a certain corner of the Tumblrverse.

Fans of the show aren’t limited to the type of person who would call in to inquire about longtime character The Human Fish, however. Comedy heavyweights like Amy Poehler and Hannibal Buress are fans and also guest stars of the show.

It was enough to garner serious intention from Comedy Central, who ultimately passed on the show the day before this interview was conducted. He wrote a lengthy post about that experience here.

Karen: The show seems very off-the-wall for those not used to sketch comedy, but you can see where it’s skillfully controlled. Is that a necessary part of the show?

Chris: That’s the thing. People seem to think it’s chaos, but it’s not. We have writers. We have really good writers. One of the things that’s fun for us is that a lot of times, the hour when the show is happening is chaos. You can’t really predict what’s going to happen live on the air, but after the show, there’s a lot of sorting things out and figuring out how to build it. We have a lot of times where the writers took something that randomly happened and figured out how to send that in directions that really surprised people. Our fans really embraced that. It keeps them on their toes. I think we’re pretty good about not letting details drop, and coming up with stuff that harnesses the momentum of mistakes.

Karen: In the moment, you’re able to embrace those moments because of the trust you have in your team.

Chris: Oh yeah. A lot of that comes from us having backgrounds in long form improv. I’ve been at UCB for 15. Most of the core people have an improv background. When the show is at its craziest, it kind of reminds me of when I first got into improv. We just keep throwing the ball back and forth. The best part is that some of the people we throw the ball to are random teenagers who are drunk at home and calling in.

Karen: Something that seems to influence your work is the old radio call-in shows, or public access TV that before there was the internet, was how kids “got famous” in high school instead of going viral on YouTube. It’s a bit of pop culture that’s gone, but for a certain group of people, that’s a lot of the appeal of your show.

Chris: It’s nice to hear you say. One of the main goals when I signed up for public access was that I wanted to make the show my brother and I would have wanted to have watched when we were 15. I grew up when there was still local TV and call-in TV.

My brother was all about prank calls. Any show that had a call-in, he would try to mess with them. We lived one town away from the home of WFMU, which was a hugely influential radio station. You’d think as a kid that you were really getting away with messing with those shows, but as I got older, I realized that the fact that they let teenagers call in and mess with them was such a cool thing. One of the best things to come out of the show is that the kids who have found it are like how I was at their age.

Karen: And those kids don’t have the alternative music stores or head shops to hang out in…

Chris: Or arcades. I’m proud of that. The kids who watch my show are creative, artistic oddballs who don’t have a place to put it yet. The unwritten message of our show is “ride it out, you will find the other people who get it, and who have similar goals. You won’t be the weirdo forever.”

Karen: Do you think your show wouldn’t be as successful if it had a large budget? Is something lost when you “class it up?“

Chris: We shot a pilot for Comedy Central, and all of a sudden, we had a budget, and we really had to sit down and think about that. We never wanted the show to be shitty just to look shitty. We had to build a set to reflect what we wanted to do. The other side of that coin is people aren’t intimidated to call into a show that looks low-budget. It doesn’t feel precious.

Karen: Your standup is a manic collage of lunacy, but your standup is very precise and well-paced storytelling. Is that a reflection of two sides of you?

Chris: It’s kind of hard to sort out. My viewpoint is the liquid, and the format is the container. I feel like they are extensions of the same person. Those are both me. That’s part of the fun of being a comedian. I was an improviser first. Then, I did a storytelling show where I told all these stories from my childhood and people got really invested in the stories. I decided to organize a bus tour of my old neighborhood to take fans to where the stories actually happened. That was the flashpoint for some of the Chris Gethard Show.

Karen: What has been your biggest disappointment on the show?

Chris: I came up with this word game on the show. All of our writers kept saying, “it’s way too elaborate.” I kept telling them to trust me. We went on the air with it and it was a failure. I took it on the chin. Luckily, one of our writers put on a costume and became the “hintmaster” just to get us through this game. That’s a good example of how we use the shit as fertilizer on our show.

Karen: What’s the experience of writing a book like for you compared to the instant feedback of standup and sketch?

Chris: Writing the book was by far the most difficult thing I have ever done. From the time I decided to do it until it was done was 6 years. The other thing that was so tough is that a lot of my stories are about unpleasant things. One of the cathartic things about being a comedian is how to play that for laughs. When I was writing my book, my editor complained that it read like a transcript of a stand up routine.

The whole thing was “take 6 years to write down your most unpleasant memories and then pray your family doesn’t disown you for airing your dirty laundry to the world.”

Karen: What was the experience of your parents reading your book like?

Chris: I give my parents all the credit in the world. It was hard for them to read about all my stories and struggles with mental health, but also when I got older, I found out my grandfather suffered from that also. I sat down with my dad to talk about what I had written about my grandfather and to ask if it was OK, and he said, “It really happened, and I think it will be interesting for people to read this and it could help a lot of people.”

When I got the galley copy, I gave it to my mom, and she just sat down and read it cover to cover in front of me. There’s some stuff that’s very difficult for her to relive.

Karen: You’ve spoken about your struggle with mental illness. Some people worry that medicating or treating their depression or bipolar might change who they are and how they work. Do you feel that way?

Chris: Before I was medicated, I would have said yes, but now that I am, I think it’s actually the opposite. Before, I would get really wild and have a lot of ideas, but when I would calm down and come out of that manic phase, I would feel like “there’s nothing brilliant about that idea at all.” Or, a lot of good ideas would come up, but they wouldn’t go anywhere, because I wouldn’t write them down. For me, going on medication is empowering. It allowed me to be organized and focus. I resisted getting help for years, because I thought I wouldn’t be funny, but the whole reason I have a career is because I went on medication. If someone said to you “having cancer makes you way funnier, you’d just say, “OK, I’ll be less funny.” But we romanticize mental illness and its connection to great art.

For more information on The Chris Gethard Show, check out the official Tumblr.

To purchase his Comedy Album on iTunes, click here