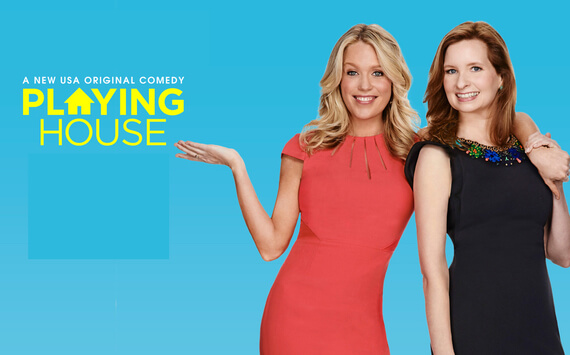 Once upon a time, there was a show called BFFs on NBC. It was a cult hit, (even creating a Brony-like subculture of men who were serious fans) but never made it due to low ratings. The Internet was not best pleased. Then, USA Network began talks with Lennon Parham and Jessica St. Clair to create another show that showcased the pair’s uncanny chemistry and their realistic approach to friendship. The result was Playing House, a story of a woman who leaves her husband late in her pregnancy, and her best friend comes home from China to help. The show has received critical praise, and has a rabid fanbase online.

I recently sat down with Lennon and Jessica on the eve of their two episode season finale to discuss what is different about how they write Playing House.

Karen: Looking back on the past season of Playing House, what has the reaction been for you?

Jessica: It has been a dream come true. All of our fans from BFFs were so excited to join us again, and they seem really obsessed with the world we’ve built. We really tried to focus on making a bigger world: a small town filled with these charming freaks from the UCB, and people really responded to that. They want to live in the town, they want to be in on our inside jokes, and nicknames, and they get all the details. The best part for me has been when people tweet the little details of the show, like the fact that we’re wearing Bird Bones’ and Mark’s robes that in this past episode that we stole from them in episode two. It makes us feel so good that they noticed. We’re comedy nerds, so we spend a lot of times planting those things.

Lennon: I don’t know if everybody does it this way, but we’re so grateful that people are connecting to it, and that they’re picking up on our little turns of phrase. When we’re on Twitter, we’re not only live tweeting episodes and talking about behind-the-scenes stuff, we actively try to respond to everybody.

Jessica: It’s nice too, because based on the feedback, I think people were really desperate for a show that accurately portrayed what female relationships are in life. People send us photographs of themselves and their best friends from when they were 9, and then pictures of them as adults. It’s so nice, because we knew it was true for us, but not necessarily true for others. It turns out, they find it relatable!

Karen: Your method of writing is very different than most writers rooms, because you improvise the first draft, and then work on it from there. Do you worry that due to being so experienced at improv together and also being best friends that you might leave other people out?

Jessica: With true best friends, you can have an entire conversation without saying a word. Lennon and I will have a whole conversation at a wedding just by looking at each other. You have a mind meld. Our details might be different, but the way that best friends show up for each other is universal.

Lennon: Because Jess and I came up through the UCB theatre, you learn quickly what works and what bombs. You learn what can become a good joke and can be repeatable. You have a shorthand about how to introduce a joke to someone.

Jessica: Lennon and I have our own language, but the Upright Citizens Brigade has its own language. Because USA gave us free rein to cast whomever we wanted, we cast our best friends. The jokes they bring to the table in their improv with us are jokes we would have 100 percent written had we had the chance to.

Lennon: Yeah, and it comes across like we’ve known each other forever because we have.

Karen: Something unique to your writing style is your ability to make small stories very big on details. There’s a layering effect where a joke starts out small and then gets bigger and bigger as the show or episodes progress.

Lennon: It’s pretty simple to me: we come from a really grounded world where anything you say could be the thing that the scene becomes about. We’re always treating it as if we would treat it in real life. It’s all observation. When you get into a fight with your partner or a friend, you usually have some weird, specific thing that you hold on to, that you fight about that has nothing to do with what’s going on.

That scene with Maggie in the interrogation room where all she wants is a pizza, she doesn’t actually want a piece of pizza, it’s all this other really complicated stuff underneath, but how it’s coming out is just “give me a fucking piece of pizza!”

Jessica: The specifics are what make people connect to it, because it’s like life. At the UCB, we have this thing called the game. It’s hard to explain,and it’s harder to learn. What happens is you start a scene and you improvise, and some kind of a mistake happens. Something odd or weird just naturally within the first almost three lines of a scene.

Lennon: You can choose to make that happen too, but most often, it comes out organically.

Jessica: You learn when that happens, to seize on it and you heighten it. That becomes the thing that makes you unique. When we’re writing, we always ask ourselves, “What’s the game of this scene?” So, the game is that Mark doesn’t want the strip show, but they’re going to keep pushing it. We try to build it so each scene stands alone. There should be a comic game in each scene. When we had non-UCB people in our writer’s room, they said “What the hell is the game? It sounds like The Secret.”

Lennon: A good example of that is the scene with Steve and the car seat. We’re waiting, and unbeknownst to us is a very good looking man is coming out to help us with the car seat. The first thing he says is interpreted as sexual, and so the whole thing is that he’s basically having sex with us through the installation. That’s the game.

Jessica: And Keegan heightened the game by doing that horrible gesture where it looks like he’s pummeling a woman and it only lasts eight seconds.

Lennon: The heightening is that he’s terrible at it, and he says he’s the fastest in the world.

Karen: Playing House is about a baby, but it’s not about a baby in the way that Modern Family is. How do you make your show defy pregnancy and baby tropes?

Jessica: We always write about what we’re experiencing. Both Lennon and I had a baby during the pre-production of this show. When we started in the writers room, Lennon’s baby had just been born and I was pregnant. So, for season one, we were more interested in writing about the high stakes emotions you feel and experience when you’re pregnant. We also wanted to put a focus on what it’s like to reconnect with an old friend. In episodes nine and 10, you’re going to see what it’s like when the baby comes, and you’ll see that their lives aren’t over. They’re still going to be trying to find love, and trying to find themselves career-wise. The baby is along for the ride.

Lennon: It’s kind of like what we say when people ask us, “are Maggie and Emma going to find their true love?” And it’s “yeah, I mean maybe…” The baby’s going to be around, but the primary relationship we’re focused on is the two women. We want to see the adventure they’re going to go on with these other people.

Jessica: If we make it to season two, one of the ideas we’re playing with is maybe Maggie goes back to grad school. So, maybe she doesn’t want to tell all her friends there that she has a new baby, so it’ll just be funny to see her pumping in a bar bathroom, and me ferrying the milk.

Karen: Have you drawn on any real life highs or lows in the writing of the show?

Jessica: When my childhood best friend died, Lennon was my first call. She said “where are you? I am coming to get you.” I realized that not only have we gotten to do our dreams together, but in the process, I’ve found myself in the most healthy friendship I’ve ever had.

Karen: I can’t leave you without asking about Bosephus. When you’re putting Bosephus into an episode, are you hoping that people will “get it?“

Lennon: Bosephus has been living inside of me for a while. The actual story about someone putting on a disguise and going to a bar to spy on someone happened to one of our writers.

Jessica: Bosephus came up in the BFF writer’s room.

Lennon: We were going to have him be a tag. It was a whole scene where Jessica and Joe were involved in a high stakes poker game with a diverse group of players, and then at the end, they get home and tell Lennon and act like everything is all right, and hanging on the door is Bosephus’ hat.

Jessica: Bosephus had to see the light of day, because let’s face it: He’s too fucking funny not to, but we needed to ground it. Anything can work if you ground it in reality. I have to be there to say “this is crazy!” And it has to be grounded in emotional reality and for a reason. She’s doing it to protect her brother. Our show has to live in a real place. We also have someone in our room called Anthony King who is the reality police.