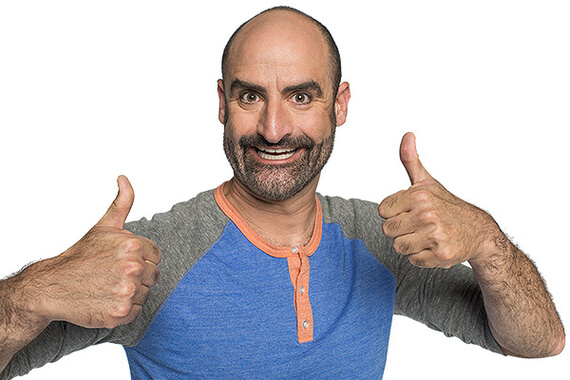 “Charming nonsensical nonsequitrs” might be the best way to describe the stand-up comedy of Brody Stevens, the star of Comedy Central’s new show Enjoy It! No two performances are ever the same. He manically runs from topic to topic rhapsodizing on Starbucks Trentas and segueing into his love for friends Zach Galifianakis and Rob Dyrdek. To see a Brody show is to be part of a visceral stand-up experience.

And then it stopped. Brody had been struck ill on a 2011 trip to Europe, and had gone off mood stabilizing medications which caused him to shift into a manic phase. Police were sent to Brody’s house when he began tweeting about things which caused concern for his friends. A group including Sarah Silverman, Howard Kremer and Galifianakis were concerned, and they worked with police to obtain a 5150 hold for Brody, which put him under involuntary doctor’s observation to help stabilize him.

This would have been a kiss of death for many performers, as some recent tabloid-famous actresses have discovered. But Brody’s indomitable spirit and tight-knit community helped Brody move past it to a new phase in his career.

Brody inked a development deal with HBO and decided to take the story of his fall and turn it into a comedy series, Enjoy It! That series premiered last year on HBO Go, and it was later picked up by Comedy Central. The first episode aired on December 1, and the next 11 are expected to air over six Sundays.

I recently spoke to Brody about how he turned a potentially embarrassing episode into funny and transcendent comedy.

KG: Let’s talk about the origins of Enjoy It! How did you decide to pitch a show about a trying time in your life?
BS: A while back, Zach said, “Why don’t we pitch a show?” He was always into my life offstage: My mom, my sister and just how I am. I pitched the idea about me getting out of [live TV] warm-up, and moving forward. I pitched the pilot, and everyone said yes. Zach’s blessing gave me confidence. We got the order, and we thought it would originally be on TV. It turned out it was going to be on the Internet, and that ended up being better for me.

KG: As the events of August 2011 unfolded, did you make a conscious decision to incorporate them into the original show idea?
BS: Yeah. Basically, we shot the pilot, and in my mind, I just wanted to continue down that path: personal and comedy. Then, I left Chelsea [Lately, where he was the warm-up comedian] on bad terms. I had 3 or 4 months after the show order before it started shooting. I was feeling bad about Chelsea. It was weighing on me. I stayed on my meds. Then I traveled a little bit and I wanted to drink. I lowered my Lexapro, because it made me sick after two or three beers, and I was feeling better. That’s where the mistakes happen. I wasn’t being monitored by a psychiatrist. I wasn’t in therapy.

I went to Ireland. I was feeling fine. My sets were good. I went to Montreal, and I got super sick. Something to do with not being on my full complement of meds. I went on an antibiotic, and it sent me spiraling.

When I came back home, that’s when it all set off. People who hadn’t seen me for a while were like, “He’s acting different.” But I was feeling good. I was going through a manic episode. When people questioned me, it just upset me. I was celebrating. I was like, “Why are you being like this? I’m having fun!” But a few really close friends and my mom said, “You’re not acting normal.”

KG: Is it hard for you to go back to the people involved in those events and ask them to relive it?
BS: When we shot it, I didn’t conduct the interviews. I didn’t want to influence their reactions toward me or their stories.

KG: Was it hard to hear their stories?
BS: At first, yeah. Stories of me yelling, being angry. The voicemails were hard to listen to.

KG: Was it hard to get your family on board? They’re not performers. Your sister seemed particularly uncomfortable.
BS: She was pretty easy. She said “Yes!” Since we did this, we’ve become closer. She was a good sport. My mom was great. My mom’s funny, and she has called into the podcast.

KG: You’re really candid about your struggles with OCD. A component of that is the delay of pleasurable experiences, and when you achieve something, you almost can’t enjoy it, because you’re looking toward the next focal point. At what point would you be able to actually enjoy it?
BS: I don’t know. Maybe if I buy property or a car. I don’t like to bring money into it. I don’t want the stress of worrying about it. What would make me happy? I enjoy doing stand-up. I enjoy podcasting. I enjoy hanging out with Major League Baseball players. I enjoy going to coffee houses on rainy days. Seeing my mom more now.