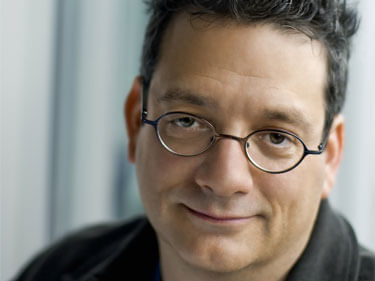 Talking to Andy Kindler About Why He Can’t Stand Ricky Gervais, Adam Carolla, and Jay Leno

Andy Kindler is a comedian who loves analyzing and criticizing comedy. An accomplished comedian, often appearing on Letterman and, most recently, on IFC’sMaron, he’s also a vocal advocate and mentor for new comedy voices. And for nearly 20 years, has delivered the never-to-be-missed State of the Industry address at Montreal’s Just For Laughs festival. It is this address where many of Andy’s beefs have been made public, and many more have been started on his Twitter account. I recently sat down with Andy at Toronto’s JFL 42. I wanted to know “What’s your problem, Andy?” He happily obliged.

What’s your beef with Ricky Gervais? You love to tweet back at him when he tweets about atheism.

There’s so much, it’s hard to focus. Right now, he’s tweeting about Derek every four minutes. He has a kind of a propaganda network going right now. He thanked North American critics for loving Derek, and The New York Times trashed it. Here’s a guy who claims he doesn’t care about what anybody says, yet he’s obsessed with talking about how great Derek is. Why doesn’t he just admit he’s affected by what people think?

He’s never funny on his Twitter account either. I was such a huge fan of the original Office, it’s disappointing. He was on that show Talking Funny and he was acting like he was on the same level with [Chris Rock, Jerry Seinfeld, and Louis C.K.]. He’s done three specials, but he didn’t put in the work like standups have over the years. He’s not an experienced comic.

The atheist thing bothers me more than anything else. I noticed when he was on Piers Morgan, he separated himself from the staunch atheist views by saying he’s okay with people who are spiritual.

You took comedy fans by surprise this year when you criticized Adam Carolla in your State of the Industry speech at JFL in Montreal. It’s not the first time you made fun of other comedians, it’s the first time that fans took you so seriously (for instance, FilmDrunk.) Why do you think that criticism caught fire. Was it just the Hitler thing?

I’m not so sure you can say “comedy fans” and “Adam Carolla” in the same sentence. When I first did the speech in the ’90s, people who reported on the speech were actually in the room and heard the speech. ThisFilmDrunk guy said “Kindler calls Carolla an unfunny Hitler.” What I actually said was “Adam Carolla is like Hitler if Hitler wasn’t funny.” That’s the absurd joke. I was just saying what I feel, which is that Adam Carolla is a racist. The evidence is all online. He’s using the guise of a comedian to say racist things. I don’t know why people have given him a pass this long.

You were recently on IFC’s Maron. What’s it really like when you and Marc get together? Is it a misanthrope’s convention?

We actually met at a Misanthrope’s Convention. We go way back; we have a tendency to fight, but in the past 10 years, we’ve become closer. I was his friend when he hit rock bottom, and every 10 years or so, I hit rock bottom. Anyone who hits rock bottom will eventually see me. I really just admire that when nothing else was going on, he started that podcast. I’m such a huge fan of that podcast. I think we’re really good friends, but there is an element to Marc where I never know what he’s going to do.

You’ve sad that “There are more laughs in two minutes of Portlandia than there are in a half hour of Louie” (which is objectively true). Why do you think people get so excited when a clown goes for pathos?

Are you trying to get me to say nice things about Derek? I have the same problems with Louie as I have withCurb Your Enthusiasm. I like stuff that’s close to reality, even though it’s slightly heightened. [Like on Maron], when Marc goes into this fantasy where he imagines what his life would have been like if he hadn’t been a comic, but with Louie, he does this stuff that’s even by design not funny. Curb bugs me because it’s always some fantastic, contrived plot.

I think if the truth is being revealed in a way that someone’s admitting something that they wouldn’t normally admit, and they do it in a funny way, that’s interesting. On the other hand, I could never do it.

You’ve called Michael Moore a hack, and you’ve literally written the book on being a hack (The Hack’s Handbook). Why do you think it’s important that the ends don’t justify the means in entertainment?

I’ve never liked Michael Moore. On Bowling for Columbine, he compared Columbine to what we were doing in Kosovo. Worse than that is MSNBC will bring him on as a hero. There’s a lot of controversy about how he gets scenes for his movies. I don’t like propaganda on either side.

With the recent controversies about what is okay to joke about and what isn’t, where do you land?

I think it’s always impossible to make a hard and fast rule. I’ve always been fascinated with what’s hack. It’s become hack among alternative comics to say “rape” or “retard.” I can’t stand it when comics defend anything that’s said and saying it’s okay because they are comics.

You’re always calling cable news out? What are your main problems with it?

I’m enraged that the same media who said nothing when we went into Iraq think their jobs now are to slam everybody. CNN is being run by Jeff Zucker, who almost destroyed NBC. The personalities are so sure when they say stuff, and they never have to retract it when they’re wrong. CNN hired George Zimmerman’s lawyer as a correspondent. It’s all opinion all day long. It’s a complete failure. the multinationals that own the news don’t actually care about the news.

Why do you hate Jay Leno so much? If you had to pick one reason?

Jay Leno is the last guy who should have gotten a talk show because all he cares about is cars. There’s a person who is just so consumed by ambition. Here’s a guy who everybody agreed in the ’80s was a great comedian. Ironically, he was at his best when he was on Letterman. He sold it all down the river to do jokes like “Anthony Weiner says if he gets to be mayor, he’ll only take $1 a year as a salary. What kind of skanky ho can you get for $1?” Skanky ho? That joke, to me, tells the whole story. Any sense of being a person is gone from him.

Why, in your clinical opinion, are Comedy Central’s roasts so terrible?

This whole idea that Seth MacFarlane or Seth Rogen are hosts is wrong. They aren’t comedians. The old roasts were about people who knew each other. They lost the whole spirit of what a roast was. Seth Rogen’s whole thing was “You’re gay!” It was just a ratings grab. Same reason [James] Franco hosted the Academy Awards.

Karen Geier is a Toronto-based writer who bleeds stand-up comedy.